Under Dr. Reeves leadership the Department went through a phase of structuring and growth which included the hiring of dedicated radiologists, radiology technologists, and development of a residency training program.

In 1965, Dr. Richard G. Lester was recruited from the Medical College of Virginia to serve as chair. During this period the Department expanded its clinical and research faculty, ushering in an era of prolific academic achievement. It was also during this time that the Department became organized into subspecialty divisions, which fostered scholarly activity and reflected the growing complexity of medicine.

Dr. Lester retired in 1976 to attend to increasing national leadership roles. Dr. Charles E. Putman, a chest radiologist at Yale Medical School, became the next Chair of Radiology at Duke at the young age of 35. Dr. Putman was known for his vigorous work ethic and organizational skills. Within a year, Dr. Putman recruited his Chief of Diagnosis from Yale, Dr. Carl E. Ravin to serve as Vice Chair. Together, they built upon the legacy of Reeves and Lester by pioneering advances in technology, clinical services, and research. The radiology residency expanded and subspecialty fellowship training programs were developed. During this period the Department expanded from primarily radiographic services to include sonography, CT, nuclear medicine, and MRI. The Department gained a national reputation for patient care, service, professionalism, education, and scholarship.

Dr. Putman retired as chair in 1985 to become Vice Chancellor for Health Affairs, eventually serving as Dean of the Duke School of Medicine and, subsequently, as a Senior Vice President at Duke University. Dr. Carl E. Ravin was appointed as Chair of Radiology. Under his leadership, the department expanded its research mission with new facilities, faculty, and initiatives. Grant funding more than tripled with the Department ranking within the top five radiology programs for research support nationally. The number of peer-reviewed publications produced by radiology faculty quadrupled within the first five years of Dr. Ravin’s tenure as chair. After 25 years of leadership, Dr. Ravin stepped down as chair to become the President of the Duke Private Diagnostic Clinic – the governing entity comprised of all Duke physicians.

Dr. Geoffrey D. Rubin, a pioneer in 3D CT imaging, was recruited from Stanford University as the next Chair of Radiology. Under his leadership, new clinical services were developed, including a 3D imaging lab to meet the growing need of imaging post-processing for patient care and management. Dr. Rubin recognized the changing political landscape with respect to health care and sought to prevent the erosion of imaging services and marginalization of radiology in a new era of medicine.

In 2013, Dr. Erik K. Paulson, Chair of Diagnostic Radiology at MD Anderson Medical Center, returned to Duke to become Chair of Radiology, having previously served as Division Chief of Abdominal Imaging and Vice Chair of Clinical Operations within Duke Radiology. His institutional reputation and connections facilitated a smooth leadership transition and paved the way for an extended period of scholarly and fiscal growth while building upon the department’s tradition of clinical, educational, and research excellence. 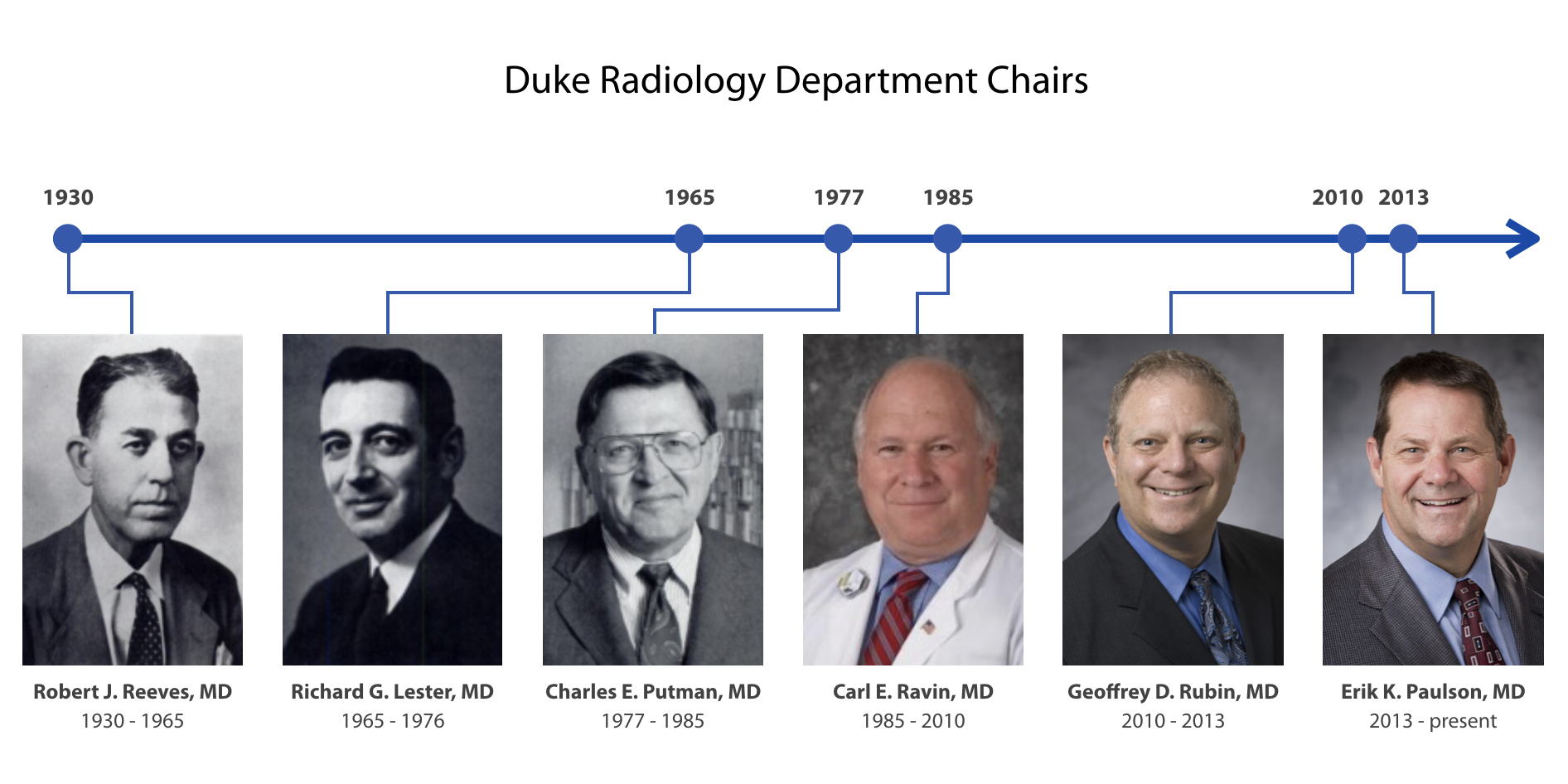